What is Expectancy Theory?

Expectancy theory contributes to the understanding of motivation. An individual's expectations are affected by the certainty they feel that their actions will result in their expected reward or goal. There is an immediate relationship between exertion and accomplishment.

Back to: BUSINESS MANAGEMENT

How does Expectancy Theory Work? 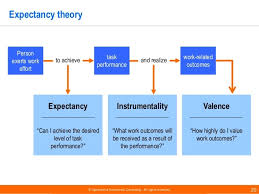 Expectancy theory was proposed by Victor Vroom in the 1960s. This theory states that individual motivation with regard to the amount of effort expended is a result of a rational calculation. There is a link between the type and amount of effort invested and the amount and type of reward received. The elements of the expectancy theory are as follows:

Managers can motivate employees by understanding and modifying the scenario such that the amount of effort will relate directly to the amount of reward received and that the reward received is valued by the employee. The theory is often criticized for being too idealistic - assuming that all individuals are rational actors making affirmative decisions concerning the rewards received from their efforts.