What is Maslow's Hierarchy of Needs?

What is Maslow's Hierarchy of Needs?

Psychologist Abraham Maslow proposed the hierarchy of needs. He presented the needs as a pyramid representing the evolution of needs in a hierarchy. 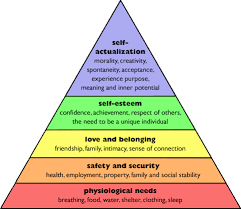 At the bottom of the pyramid is Basic Human Needs. Once these are satisfied, we then begin to look for higher-order needs.

The hierarchy proceeds as follows:

An individual may experience a combination of these needs at any time. This is because they affect different aspects (physical and mental) of the individual.

Understanding an individual's need structure allows a leader to understand what will motivate an individual to pursue a course of conduct that will satisfy those needs. For example, a person's physiological needs may be met simply through compensation.

Safety may be met by job security.

Social needs may be met by having a family, friends, or other routine acquaintances (such as close colleagues).

Self-actualization is the most difficult as it requires the individual be afforded the opportunity to move forward in their own direction.

Any of these scenarios may be within the authority of the leader to provide - thus allowing the leader to motivate the subordinate.