The open systems model, proposed by Katz and Kahn, developed a framework for open-systems theory that encompasses: 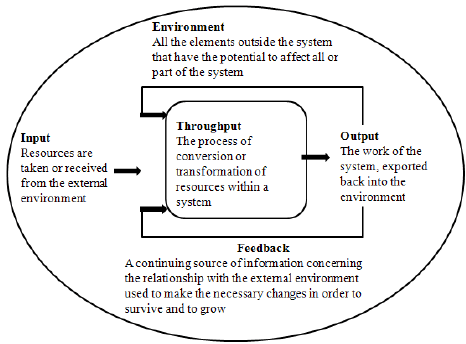 In addition to identifying the four phases of an open system, Katz and Kahn cataloged several other organizational characteristics that support the open systems theory and have implications for the design of successful organizations.

For example, they recognized the universal law of entropy, which holds that all organizations move toward disorganization or death. However, an open system can continue to thrive by importing more energy from the environment than it expends, thus achieving negative entropy. For example, a failing company might be able to revitalize itself by bringing in a new chief executive who improves the way the company transforms energic inputs.

Another characteristic of organizations is dynamic homeostasis, which infers that all successful organizations must be able to achieve balance between subsystems. Thus, subgroups must maintain a rough state of balance as they adapt to external influences.

Katz and Kahn also characterize open systems by equifiniality. This concept suggests that organizations can reach the same final state by a number of different paths. In fact, the course is not fixed and may develop organically as both internal and external influences intervene.