The conflicting interests of parties to a negotiation can be presented in a two-dimensional framework, known as a dual-concern model. The model provides a negotiators concerns for personal outcomes and the outcomes of others independently. It demonstrates how parties arrive at a disposition toward conflict resolution (competition, avoidance, collaboration, accommodation, or compromise) which will ultimately affect the strategy and tactics employed in the negotiation.

Back to: Negotiations & Communications

What is the Dual Concern Model? 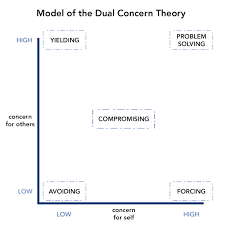 Five major strategies for conflict management have been identified in the dual concerns model: